Inspired by the love of singing and a passion to share the Brazilian culture, in 2001 Loren Oliveira and Beatriz Malnic joined their musical talents and placed an ad on a local newspaper recruiting women to sing together.  Since the ad did not yield the desired result, Beatriz and Loren turned to their social network and diligently assembled a small group of fifteen women from varying backgrounds. The Brazilian Voices was then founded and a year later the group started to perform in small venues.

In 2003 the concept of a vocal group setup without a formal conductor was introduced, even though it posed a challenge to the group since amateur singers would now have to perform in a more independent fashion. The group has since been nominated and received numerous awards for a number of exclusive performances.

Brazilian Voices was created as a result of the need for expression of people living in a foreign land who appreciate music, art, poetry and Brazilian culture in general. An authentic combination of factors brought together the common interests and stories of immigrants in South Florida to the sound of their female voices, translating the essence of the Brazilian soul.

From the swing and softness of the Bossa-Nova beat to the frenetic vigor of the samba, this remarkable group of female voices was born and its strong presence has been prominent ever since.

The beauty and seriousness of the proposal, in addition to the musical sound of the group, charmed and attracted the interest of local producers and culture departments of the American government (Broward County – Cultural Division, Funding Arts Broward – FAB !, Miami Dade Department of Cultural Affairs, Florida State Department of Cultural Affairs and National Endowment for the Arts), NEA – National Endowment for the Arts, which financially supports and encourages cross-cultural integration.

The inclusive group’s philosophy also welcomed voices of other nationalities. The desire to include our music and culture into the scenario of a diverse international community, in this case, South Florida, was beginning to materialize. Since then, Brazilian Voices has been fulfilling and expanding its mission.

Brazilian Voices has accumulated over the years more than 450 original vocal arrangements, which were carefully prepared by music directors Beatriz Malnic, who composes and writes the arrangements with three and four voices for Sopranos 1 and 2 and Contraltos1 and 2, and Loren Oliveira, who develops concepts and elaborates rhythmic combinations.

When Viviane Neves joined the group in 2004, she applied her professional sound engineering expertise to expedite the learning process of these vocal arrangements by creating sound tracks for three different voices (Sopranos 1 and 2, and Contraltos) and posting them with their lyrics in the Brazilian Voices web portal. This has enabled singers to study between rehearsals, thus accelerating the development of a repertoire. Coordinators are also assigned to each of the voices, allowing better monitoring and offering support to newcomers.

The group presently counts with 32 singers for major events but also has the flexibility to assemble smaller groups and customized performances, targeting smaller audiences and special events. Meetings occur twice a week for vocal training and music practice for performances, with an annual average of 142 rehearsal sessions. Since the group started in 2001, more than 150 wonderful women have joined the organization. It is a big family that shares a passion for singing and sees rehearsals as special and precious moments, when members have fun, relieve stress, and gather enormous positive energy and wellbeing through music. As most of the vocal practice is done at home, this amateur group is able to perform at a professional level while still prioritizing family and work. 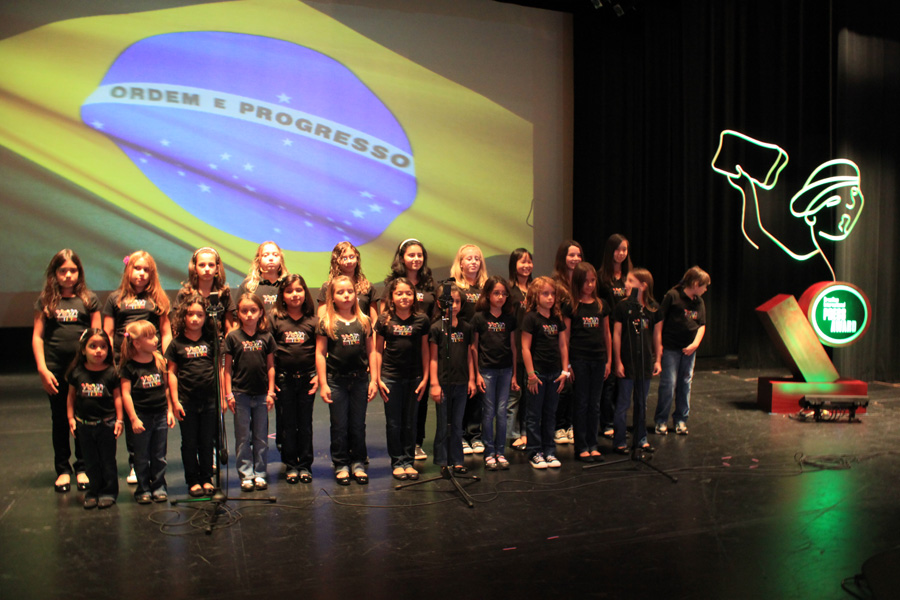 Find out more about this program which was a treasured legacy of the Organization between 2005 and 2012.

As a result of years of hard work, dedication and determination, Brazilian Voices was honored with the coveted Brazilian International Press Award in the following categories:

Brazilian International Press Award
Outstanding CD by a Brazilian Artist recorded and distributed in the U.S.